"Over one-hundred singers were involved, recording over six hours music. Most were elderly, with many being in their seventies. All but one had never played music or written songs before, and all were instant compositions."

"I’ve forgotten now who I used to be" is more than an album. A collection of riveting field recordings from Ghana’s witch camps, it explores an environment of women ostracized by sinister means, seeking refuge in community.

The record is a collaboration between Ian Brennan, the Grammy-award winning producer whose works spans thirty-six records by artists across four continents, and Marilena Umuhoza Delli, the Italian-Rwandan photographer, author, and filmmaker whose work has been published around the world, by the BBC, CNN, Al Jazeera, NPR, VICE, Rolling Stone, and the New York Times, among others.

Their observations were captured not just through field recordings but in a mini-documentary, which we're exclusively premiering today, that provides a first-hand look into the witch camps. We also asked Ian Brennan to recount their experiences making the record and time spent at the settlements. Read his words and watch the documentary below.

"The 'Witch Camp (Ghana) I’ve forgotten now who I used to be' album was recorded across three villages in northern Ghana that house witches for their own protection. Over one-hundred singers were involved, recording over six hours music. Most were elderly, with many being in their seventies.

All but one had never played music or written songs before, and all were “instant compositions.” The recordings were done 100% live and without overdubs. And all of the songs were recorded outdoors.

A world away from the modernity and progress of the coastal capital Accra, the recordings took place in various rural locations— one a widely known but nonetheless officially denied haven for witches; another where the women are kept completely clandestine; and the last, an officially sanctioned camp.

Those declared witches survive selling firewood. Or they work the field for the chiefs. Some have had to resort to prostitution. Though rarer, there are men that are also accused and they are deemed ‘wizards.’

These individual’s mental health issues and/or physical ailments— blindness, misshapen limbs— have instead been vilified, and the vulnerable shunned and ostracized, usually as a ruse to steal their land after their husband’s passing.

Myself and my wife, Marilena Umuhoza Delli— who does all of photos and videos for our projects— have devoted ourselves for over a decade to trying to provide a platform internationally for original music from under-represented or even persecuted populations and regions.

On the Witch Camp (Ghana) song “Everywhere I Turn There Is Pain,” a local toddler wandered in and began to play a tin pan. A sound scientist, she was running experiments—conducting an exploration. The sympathy of her responses remain—evidence of synchronicity, the recording an acknowledgment of fate.

Another location was inauspiciously a field of dried corn husks, inches deep. Passing footsteps were audible throughout different takes. Rather than trying to hide these kinds of “mistakes,” we turned them up. The sound they created is especially evident on "We Are No Different Than You," as well as the tree full of birds chirping their accompaniment.

The best song came last—fighting the loss of daylight and the obstructionism of the leaders who objected that one woman “wasn’t a singer,” I could see in her face that the she was pregnant with expression. She stepped forth, opening a secret passageway within herself to spontaneously deliver “Left to Live Like an Animal,” an improvised opus lasting only minutes, but bearing as honest and direct a performance as can be found." 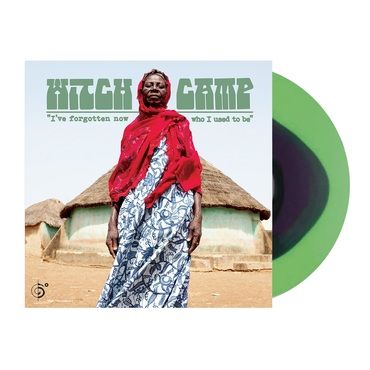 Witch Camp - "I've forgotten now who I used to be"